My mother once told me when she was a little girl, my grandmother had the case of itchy feet.  No, this post isn’t really about itchy feet.  At least not in the way you are thinking.  Whether it was a southern term or not, I may never know, but one thing I learned was that grandma had a problem with staying in one place.

Granted, maybe it was because of the heartache of losing her husband to cancer.  Maybe she just couldn’t decide where exactly she fit, so she continued to travel between her southern and northern homes, all the while dragging her children with her.

My grandmother, who was very southern, was married once and had at least nine children.  There may have been more, but were lost during childbirth or during infanthood.  This wasn’t something that was really spoke of, and no matter the age, not something you want to bring up.  The loss of a child cannot be replaced, no matter how many children you have.

As I grew older, I learned that my grandmother was not the only one with itchy feet, moving from here to there and back again.  I learned many of my aunts and uncles have done the same.  Looking at my mother, I wondered how she had not done the same.  What kept her from constantly moving around?  Her being the youngest, she was there every time my grandmother moved.  Maybe she was tired of it and wanted to settle?

She married my father when she was only sixteen and has been with him ever since.  Not without some issues I’m sure, as every marriage has its problems, but it still had me wondering why we never moved much.  I assumed it was because she was tired of moving and my father wasn’t much into moving out of his home state.

This is where I insert my giggling.

As I came into my late teens, I began to really connect the itchy feet to what others may confuse as OCD.  Though, there is a slight case, it wasn’t entirely that, that I was seeing of my mother.  It was her uncontrollable habit of moving things around in the house.  We would have everything organized and settled in.  One day we would come home from school and everything would be rearranged.  Again.

You would think my father would be used to her doing this after all these years!

This would happen every three to six months.  She would usually do this herself, making sure everything is as where she wanted it.  In the exact spot, angle, you name it.  I do recall my sister and I helping her a few times, but  I know she liked doing it herself.  I know, because now I see myself doing the same thing.

You may now insert your giggle.

It started with moving from apartment to apartment, town to town, and back again.  Whether it was because I chose to stay in a rotten neighborhood until I had more money flow, landlord was just that bad, or a better job offer, there was always a reason for me to move.   It never bothered me to pack up and move.

Married four years and two children later, I’m in a house longer than I have been anywhere.  I thought I had finally relaxed and everything was fine.  That was until I started getting fidgety.   First, I didn’t like how the kids rooms were set up, so I rearranged them.  Not liking how the dvd’s are piled high in a corner, I invested in a multimedia storage tower.

After that, I only got worse.  I have moved my living area around so many times it’s crazy.  Because we plan on going on the road RV style, I didn’t want to invest in a beautiful living area set, so we went with these comfy microfiber futons.  These were great because I’m all about saving space.  Seeing they have storage underneath was a huge plus!

After reorganizing the downstairs, I thought I was good.  That was until I went into my daughter’s room.  The poor girl was stuck in the smallest room.  When we moved in, she was just getting out of a crib.  Now that she is my super active snug bug, she needed more room.  After tripping on her princess house and her many stuffed animals for the last time, I knew something needed to be done.

I contemplated telling my husband we need to move because I couldn’t take it anymore.  Again.  After thinking this through, I knew I had to chill out.  So I sat in the middle of my bedroom floor and thought about it.  I’m like House.  I like puzzles.  The only problem this time, is I really got into it.

With five rooms, I decided we had to redo the whole bedroom situation!  My studio became my husband and I’s new bedroom.  My daughter now has the biggest room in the house.  My studio/ office?  It’s now in the tiniest room of the house.  This should be interesting considering I paint, write, do commission work, and do photography.  I can make this work, right? 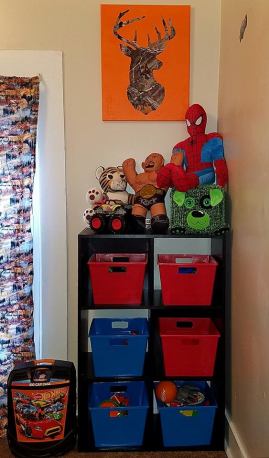 And the kids’ room?  I wasn’t done just yet.  I had to go out and buy cube organizers.  One in black for my sons room, and one in white for my daughters.  Eventually those will go in my studio or bedroom and they will have upgraded 9 bin cube organizers.

Just when I thought I escaped the itchy feet syndrom, I realized I am now part of it, and I’m not the only one.  My sister has the same problem  ♥♥

I wonder where my itchy feet will take me next.

Added:  For those that see the Vicks Starry Night Humidifier, that is currently being used as a nightlight.  It works wonders for the soft glow of stars and moons, as well as the dry cough nights!